“We were a lifeline to so many in lockdown who were feeling isolated, or a bit helpless or anxious. And likewise, for me, when I was broadcasting radio from this little cupboard set up I have in my house, I still felt that powerful connection, more than ever.”

As our third guest, we have Dee Woods from Radio Nova. Dee hosts the Nova Lunchbreak show (weekdays 1 to 3pm) with seriously-addictive tunes and celeb guests, as well as Friday Night 80’s (Friday night 7 to 10pm), where she digs out the musical gems that rocked the decade. From those lighters-in-the-air power ballads, to the anthems you can sing into your hairbrush, get ready to be reminded of the best tunes, born in 80s, that still sound amazing today.

Click below to listen to the interview or scroll down to read.

Tell us a bit about yourself.

My name is Dee Woods. I present the Nova Lunchbreak, weekdays 1 to 3pm on Radio Nova, and also Friday Night 80’s on a Friday night (funnily enough!) 7 to 10pm. When I’m not working in Radio Nova, I’m at home in my house in Malahide with my husband, my two children and our dog.

How did you end up working in the world of radio?

Radio has always been in my world. It’s always been on in my world. In my house, growing up, there was never a quiet moment, even when we were out. This was the days before the energy crisis. We leave the radio on, come home to the radio. It was just never off. Never did I think I could get an actual career out of radio. I literally fell into this world. I did a Journalism degree in DIT, and as part of the college course, we had to do work experience. My lecturer was Valerie Cox, who put in a phone call and got me a placement in East Coast Radio, a place where so many people have started out and learnt so much in this world that we work in now. I went in on weekly work placement for a few months in the newsroom there with Gareth Farrell. I ended up getting a weekend news reading gig out of it, that turned into a full-time news reading job at East Coast and that then spiraled into a news reading job in 98FM. And after many years of news reading, I decided I wanted a bit more craic, even though I did enjoy it, and I wanted to pursue presenting. So, after a few more pin balling, I’d call it… falling around different radio stations. I landed eventually here in Radio Nova and I’ve been here for the last 12 years.

What is a general day in the life of your role?

It’s a total cliché to say it, but no two days are the same. I mean, they are in the sense that we play “seriously addictive” music and its always quality stuff that we’re putting out on Radio Nova. But because the world is changing and we’re very much in touch with listeners, with what’s going on, social media trends, what’s being talked about, what’s happening. So, it is different every day while being generally the same, I suppose. So, a general day in the life is just looking after the music and keeping an eye on what’s happening and interacting… constantly interacting with our world on our listeners: who are our world!

What do you like the most about your job?

I suppose what I like most about my job is that I’m allowed to be myself, which isn’t always the case in radio presenting. We have wonderful listeners (and I’m not just saying that!). They are so passionate about the music we play and we’re all just together in that we all just are enjoying the output. Whether it’s me on one side of the mic or the listener at the other end of the radio or the speaker or whatever. It’s just a total pleasure to play the music and talk to people every day.

My hosting style would most certainly be just natural, relaxed and there’s enough problems in the world. Everyone has their heavy stuff going on. I’m just here to offer a bit of crack, some decent music and just maybe, hopefully, bit a respite from any madness that might be going on.

Do you have any funny stories that happened to you while hosting a show?

Oh, yeah! I think anyone who works with a “Mic Live” sign has had some funny and unpredictable stuff happen to them during the course of time on the airwaves. I suppose the ones that spring to mind would be: The ice bucket challenge on the air on Breakfast radio a few years back on Radio Nova. Woke up half the neighbourhood and were subsequently banned from doing any broadcasts outside the building. Whoops!

Another time I was kidnapped by my colleagues, blindfolded and taken to do a mystery interview. I’m not really sure why they thought of doing this! They drove me to the 3Arena on the day Stereophonics are performing here. They threw me into a room and in came Kelly Jones and Richard Jones of the band. And there I was left with no prep. Didn’t know I was going to see them and had to interview them. And I was a lifelong fan of Stereophonics from day one, so of course I could think of nothing to say that moment! And years later I still wake up at night thinking of all the great things I should have said and of course didn’t. And it was an interview that bombed! Actually, it’s not really funny, it’s more cringing really, now that I think about it.

And a more recent one would be following our breakfast show hosts, PJ Gallagher and Jim McCabe, as they did a charity tandem cycle for The Jack and Jill Children’s Foundation through the south side of the city. I was following them with a microphone, getting commentary, literally a running commentary. At one point I got out of the Nova Jeep that I was in following them because they were going very fast on this tandem bike. They were actually going great guns! I got out to run. I ran a little bit ahead to catch them coming by for the live link, but they were too fast. By the time they came to me on the radio, the lads had shot off into the distance. I tried to run after them and I genuinely, you know, lost a lung, trying, trying to keep up and it was possibly one of the some of the worst radio ever. But we did laugh about it later. How I am I still allowed to work here?!

You were awarded the Gold award for DJ of the Year at the recent IMRO Radio Awards. How does that feel?

Winning the Gold Award for DJ of the year at the IMRO Radio Awards was very surreal. In fact, I still don’t really believe it happened! Only that there’s video proof taken from the people sitting at our table on the night and the award that’s sitting on the shelf at the moment, of course! No, it was I was completely taken aback, and it’s been wonderful. Like here we are about four months later, and there’s still people coming out of the woodwork to congratulate me, which is so lovely. I don’t think anyone thinks of awards and accolades on a daily basis when they’re doing their job, but it’s really nice to get recognition from people in your industry and to be in a room of amazing talent and to have your name called out. It was very emotional. I’m not going to lie. I’d love to be able to say that. “Oh, awards. It’s not about awards”. You know, I’m not here for that and I’m not. But it was lovely to witness.

What makes Radio Nova different from other stations in your opinion?

I think Radio Nova is very different from other stations. I’ve worked in a fair few radio stations at this point, and I know for a fact that from day one, because I was there (pretty much) our listeners are completely invested in our music. They’re very passionate about the music. They take their music very seriously, their great music, as we do too. We, the presenters, are given a lot of room to breathe on the air, which again can differ to other stations. We can chat a bit more, we can engage a bit more with listeners, we can get involved in the music a bit more. It’s not just wham bam as it can be on other stations. It’s a bit more organic. And I think that’s why our listeners appreciate what we do at Radio Nova. We’re just real people playing real music and we are genuinely, really loving it.

Why is local radio important in your opinion?

In a world where everything seems to be going automated and anonymous and the like, local radio is just so important. I think lockdown really highlighted that fact. If we didn’t know it already, how we still need human connection on a real level, not on social media, not behind a keyboard, where we can actually hear a voice talk about things that are happening in the world now and be able to engage with them. Whether it’s through WhatsApp or just by chatting out loud to your radio. We all do that, don’t we?

We were a lifeline to so many in lockdown who were feeling isolated, or a bit helpless or anxious. And likewise, for me, when I was broadcasting radio from this little cupboard set up I have in my house, I still felt that powerful connection, more than ever. And our listenership figures went up because people were discovering or rediscovering the connection that radio has. It’s a connection that I think no other medium can offer. It’s just you and that person and the music or the chat or wherever it may be. It cannot be replicated by a playlist or something like that. It’s just now it’s in the here and now. And as someone who presents an 80s show, you know, I’m going to say retro is best. The old stuff is the most reliable. I hope radio lives on for a very, very long time. Something tells me it will! 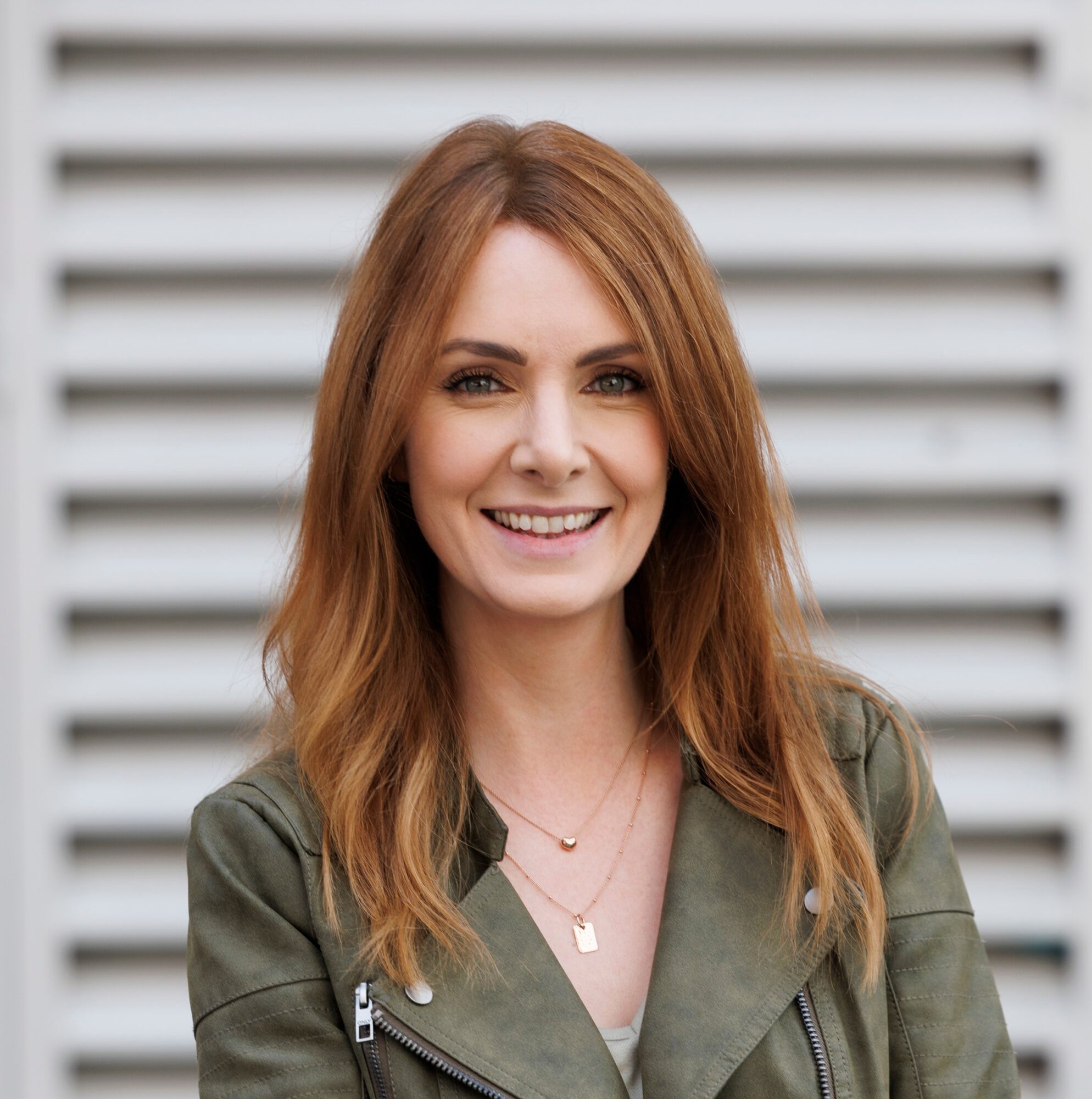